#BacZac a Night to Remember

#BacZac a Night to Remember – UPDATE

Those who have purchased tickets among others, may have heard the news that the BacZac a Night to Remember event has been moved to the 13th January 2018.

Anyone who’s brought a ticket and hasn’t been contacted by a BacZac His Legacy representative, please feel free to send us a message on here with any concerns or queries you may have.

Unfortunately Beau and his talented array of friends were struggling with the timing of the event on the 3rd November.

With that in mind we’ve taken the decision to move to the new date of the 13th January 2018. Our main aim is to make this night as special as last years, this extra time means it will be even better than before.

Tickets are on sale for the new date NOW, so get buying! Let’s see in 2018, which looks to be a big year for BacZac His Legacy, with a fantastic evening.

Thank you as always for continuing to BacZac. 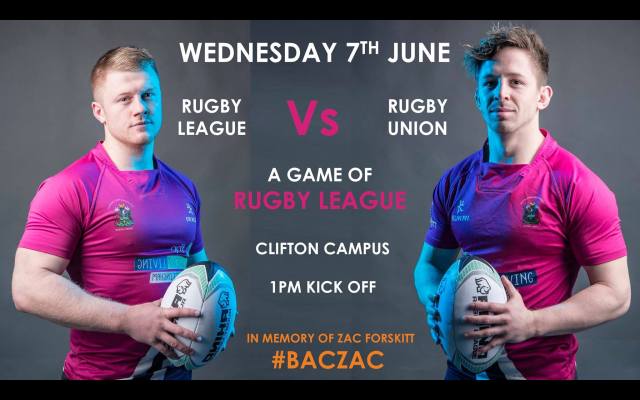 13 Walkers of all ages, tackled a 93 mile walk across Norfolk in 4 days in aid of BacZac his Legacy.

Donations can still be made via Justgiving.

Some additional Photo’s taken on the trip can be found here.

Well Done to all!!

On the 12th March around 40 runners will be partaking in the Silverstone Half Marathon.

The aim is to raise money for the BacZac His Legacy fund, which looks to support young adults and their families who are fighting or who have fought cancer.

Any donation you can make will be greatly appreciated by those running including some of Zac’s family and friends.

Thank you for your support as always.

Tickets are £90, this will include entry into the nights raffle and A lovely 4 course dinner and wine.

This will be a fantastic night for sport lovers!

Enjoy your night!!
Thank you once again for continuing to BacZac.

Invite you to the official launch of ‪#‎BacZac‬ his LEGACY

On Friday 2nd September 2016 at the Picturedrome, Northampton.

For a night of Cool Jazz, Soul, Funk & more 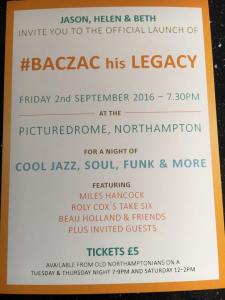 For Zac’s 18 birthday he received a gift that allowed him to complete one of his many ambitions in life, a tandem skydive. In his honour and to raise funds for the BacZac His Legacy fund on the 16th August 2016, the day after what would have been Zac’s 21st birthday, Bethan (Zac’s sister), Lucy (Zac’s Girlfriend) and Jasmine (Zac’s Cousin) will be completing the same journey he did 3 years ago.

Zac battled with 2 rare forms of cancer, during which a campaign was put together to support Zac and his family with the challenges that lie ahead, known as ‪#‎BacZac‬. Sadly Zac lost his fight earlier this year but as we look to continue and create a legacy for him to be proud of we have now formed the BacZac his legacy fund, where his family and others who were involved with the #BacZac campaign look to support families in similar positions, along with supporting the charities that helped Zac and his family.

Anything you can sponsor is greatly appreciated and we thank you for any donations you give. Click here to donate.

Thank you to the ONs squad and supporters who raised £307.50 for BacZac his Legacy at the Olney 7’s today 👍 an unbelievable storm turned the venue & pitches into a mini Glastonbury ( muddy ), plenty of drink and a great BBQ, thanks Mick & Veronica.

The family would like to thank everyone from the NTU cricket society for organising the ‪#‎Baczac‬ the Legacy cricket day on Sunday. A special thank you to Callum Walker,Shannon Barton, Lawrence Uttley, Josh sharpe, Lizzy and everyone we have missed out that made the day so special. Also to thank everyone that played and supported Zacs great legacy he would of been so proud.

The family will keep you posted on how the money raised will be helping other young people like Zac with their fight with cancer ..

Hugs to you all 💚

They will be installed in all of the bedrooms and a new family room at Billys House in Nottingham.

Thank you so much for supporting BacZac his legacy.