ONs rugby has been shocked to hear that Zac Foskitt, one of our rugby playing family, has not only been diagnosed as having a tumour in his chest but he has also been diagnosed with an aggressive form of leukaemia.  What has been particularly shocking is the speed with which this has happened.

From feeling perfectly healthy not that long ago, on 9th September Zac went to the doctors as his heart was racing.  The initial diagnosis was potential fluid on the lungs so he was sent for a chest x-ray which showed a shadow, and he was subsequently admitted for fear of pneumonia.  From further tests, on 14th September he was told he had a cancerous growth (mediastinal germ cell tumour) in his chest pushing on his heart and on 16th September Zac was moved up to hospital in Nottingham for specialist care.  On 18th September he had a bone marrow test and as a result of this test Zac was informed that he also has acute myeloid leukaemia.  An urgent treatment plan was initiated and an intense 5 days of radiotherapy started the same day to try to stop the tumour growing.  On 23rd September Zac was moved to the Haematology ward and on 24th he started 10 days of chemotherapy for the leukaemia.  This is an extremely rare case and only one other person in the world (in South Korea) has both these forms of cancer simultaneously.  Obviously the medical staff are doing everything in their power to formulate an effective treatment. 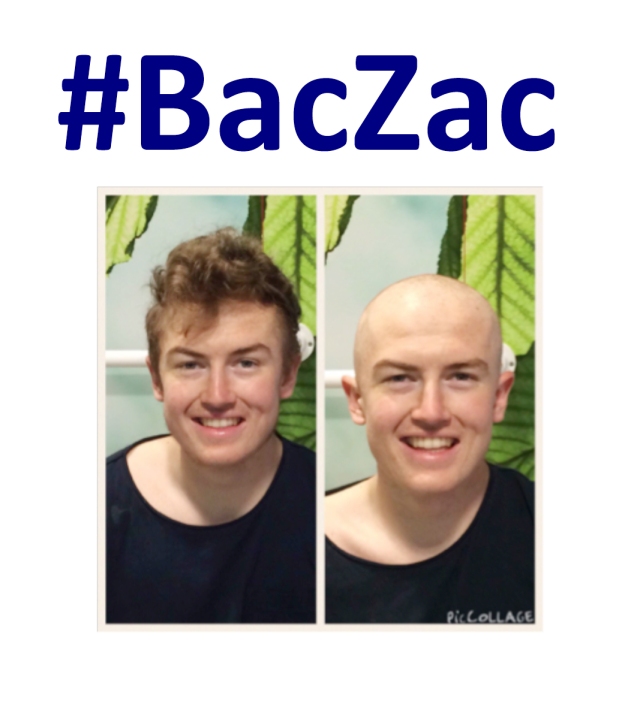 The treatment is now taking its toll and Zac cannot bear to eat or drink as it is too painful and on 9th October Jason shaved the hair off Zac’s head as it had already started to fall out in clumps.  Despite all this, Zac continues to smile……………

The family are taking each day as it comes as nobody is able to say how long the treatments will take but they take comfort from the previous Matt’s Match campaign for another ONs player, who is now fully recovered and at university.

Although many of you will already know Zac and his family, for those of you who don’t here is a brief intro:

Zac, now 20 years old and he has been at ONs all the way through our Minis and Juniors and then Colts before setting off for university in Nottingham.

Whilst Zac was performing on the pitch, his dad Jason, mum Helen and sister Beth were supporting the club off it.  Jason was Zac’s age group coordinator from U6s to U16s, Helen helped run the kit shop for a number of years and Beth helped in the tuck shop and then the teas/coffees and bacon rolls on a Sunday morning.  Jason and Helen were also huge supporters with Matt’s Match, helped with numerous clinics for Anthony Nolan Trust and are active fundraisers for good causes. Jason is a self-employed roofer who obviously will be focusing on his family and Helen gave up work straight away to be near Zac full time and has a room in a Clic Sargent house.

How can we help?  Well, being there for Zac will cost a lot of time and money so a specific #BacZac campaign has been launched. The Old Northamptonians are 100% behind the #BacZac campaign and all fundraising efforts will go towards helping the Forskitt family.  There will be numerous fund raising events, including a #BacZac Movember – to raise money for the Forskitt family so they can care for Zac as best they can.

If you are considering your own fundraising event then please consider Zac.  Sometimes we look further afield when there is real help needed closer to home.

Thank you for reading this article.  More info on events and updates on Zac soon.